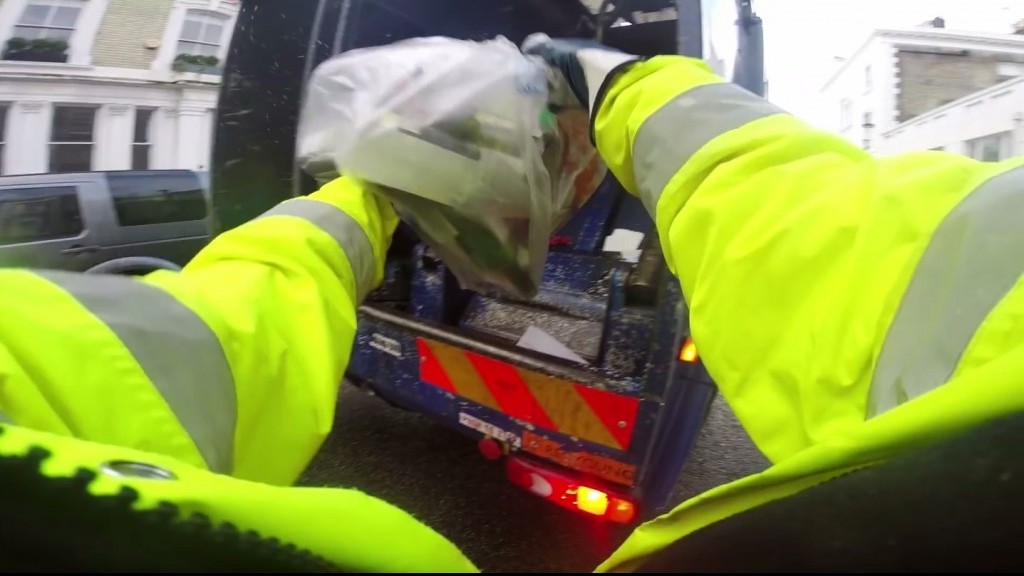 I sometimes find myself holding a piece of packaging over the recycling bin, hovering over the top because of my indecision about it being the right kind of plastic, or if it would actually be of value to the recycling industry. And considering I am one of the only designers who also is chartered by CIWM you’d think I would know. Worse still if I am having that moment of uncertainty then what about all the other people in other households who haven’t had access to those that run material recovery facilities doing like I have – how do they decide?

Last year Coca-Cola Enterprises and the University of Exeter’s report ‘Unpacking the Household: Exploring the dynamics of household recycling’ looked into our throwaway habits and came up with some fundamental problems that seriously hinder the efforts of those recapturing material streams for reprocessing. It seems that not only are our houses not designed well enough to make recycling an everyday habit (sorting recyclate needs more space and to not be limited to the kitchen), but we also all suffer from the same indecision I have just written about: one of complex material confusion.

There is, without doubt, a mass of confusion around the complexity of the things that we put in our numerous bins. This is partly through the advances in technology used for sorting in material recovery facilities (MRFs): where once laminated packaging was a no-no, now it’s welcomed – but only if your local authority collects it. Mainly, however, it is because of the technical nature and design specification of the packaging itself. It’s so advanced it can keep the temperature of a product just right for a shelf life and has built in micro barrier layers to stop contamination from the outside. Even the types of plastic have different properties; where some are great for heating up food in a microwave others will melt under hot water. The technological advances in our recycling systems are thus always playing catch up with the packaging itself!

It also seems crazy that some very recyclable materials like polypropylene (the microwaveable plastic used in soup pots) are not widely collected. Reasons for this are most probably economic, the market being not yet big enough to warrant mass collection and there being still only a number of places that can recover it. 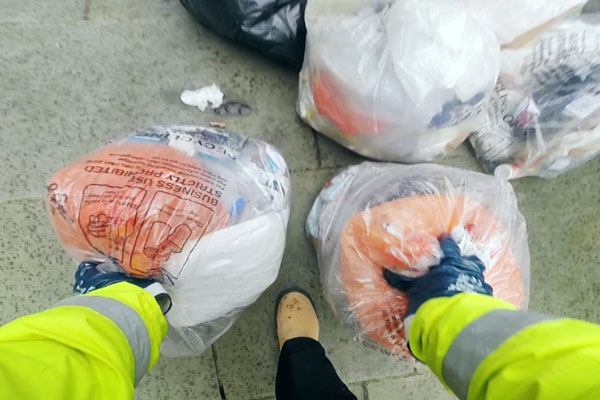 From designer to rubbish collector…

So how, as a designer, could I help make this system become more effective? As with all design projects, start with research and user experience. The fact that I still throw things away (both in black and green bins) on a regular basis has given me plenty of user insight from the household perspective; but what impact do my actions have on the rest of the system? Using the methodology of The Great Recovery and our ‘insight focused’ design process, it was time to put on some ballistic trousers and jump on the K7 split truck for a day of ‘bin’ training on the streets of Kensington and Chelsea.

My 6.30am start kicked off with waste handling and public relations training and ended nine hours later with me exhausted, hungry and slightly smelly – but with the satisfaction of another collection completed! For my shift, I joined Danny and his team on the mixed bin bag pick up. The K7 is a state-of-the-art 50/50 ‘split’ truck, meaning it compacts recyclate on one side and waste destined for incineration or landfill on the other. When one or both are pretty full (and that is at least twice in one day) it is taken over the river to a sorting station to be weighed and deposited into the right streams, either a MRF sorter on site or onwards to one of London’s incinerators or landfill sites.

Danny has been working in the industry for over 30 years. He knows a lot of residents by name and loves his job. He is so good at it that he trains others in driving the trucks –no easy thing when you’re having to reverse down the tight streets of London with a Porsche on one side and a Bentley on the other! He is full of stories and insight on the realities of the waste system at this important point of contact between households, local governments and the waste industry. 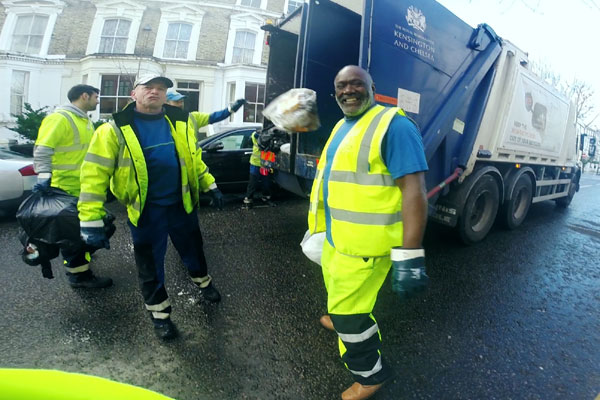 My experience on the streets in West London highlighted that, in the same way the Household Recycling report observed, habits are set by the structures around us.  The collection process was run like this: rubbish bags were brought up onto the streets, typically from mansion block basement bin stores by the team members working ahead of the trucks. These were piled together in regular places along the streets, allowing the truck to do fewer stops, making their work faster and more efficient and better for traffic too. This is a system that has been developed over many years of trial and error, and that works for the types of housing stock and streetscape in this specific part of London.

Because of the way the streets are laid out, the houses are built and therefore the bags are collected, the connection between the rubbish produced and the household producer is broken. Proving that a bag belonged to someone is both time consuming and complicated. Those that work out on the streets in the domestic waste collection system see the mistakes people make on a daily basis and are in the best position to police the system and influence householders. But in the same way we talk about ‘supply chain transparency’, if we cannot track the flow even from household to bin bag, how can we go back to tell people their recycling had to be incinerated because it had too many banana skins in it? This is individual producer responsibility at a household level. 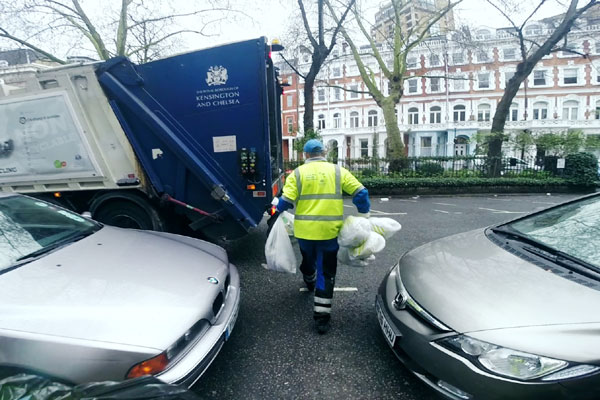 We have thirty-three collection authorities in London, each with their own take on material collection systems. Four use the twin-stream system (where fibres such as newspaper are collected in separate boxes from glass and plastic containers), five sort at kerbside and twenty-four go for co-mingled recycling. Each pick up different materials, use different containers in different colours and collect on different days with different regularity. It’s no wonder we all get confused! Surely it’s time for some consensus on consolidation?

When you are working fast on a shift, assessing the bags as you pick them up, you get good at spotting contamination and it is best to err on the side of caution – meaning that much has to be diverted from recycling. One banana skin was ok, but a banana skin and some dodgy-looking food packaging with the chance of a half-eaten burger inside would not pass and would get the team a black mark at the sorting centre.

In this one shift, we estimated that half of the recycling bags were contaminated enough (as judged by each of the workers by eye) to remove them from the recycling stream and into the black bin side.  The individual household is to blame here, as it is surely common knowledge that food and dry recycling just don’t mix. But apparently we need to keep on telling households what they can and can’t recycle. Say yes to paper (apart from shredded), again and again, and no to food in that bag. And reinforce the message on a weekly level. My home borough in fact used to warn me that they would not collect my rubbish again if I kept putting the wrong things in my recycling box. I soon sorted it out!

It was often hard to differentiate between bags. The households had no colour allocation for ‘black bin’ rubbish, and often used carrier bags or white bin bags (which is where the difficulty came as the recycling bags were also white but slightly more transparent). Some were black which, I was told, often hid a multitude of sins like half empty tins of paint (the lids act as a projectile with the paint generally following when the truck’s compactors push the rubbish back). The bags become anonymous as soon as they are moved onto the street and mixed with others, no longer the householder’s problem – unless of course it’s their car that gets covered in paint! We also estimated that a lot of recyclable material was going into the black bin bags, but who knew? Out of sight, out of mind! 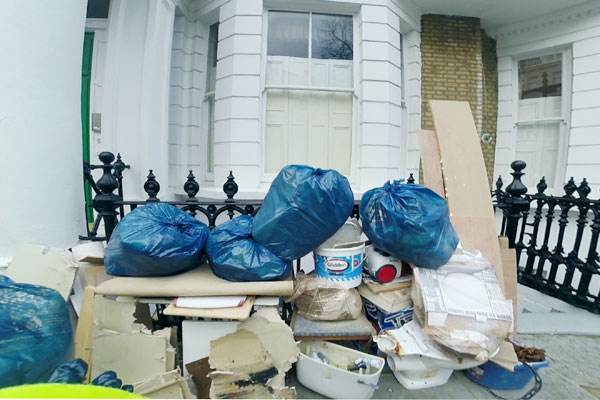 We know that between the user deciding they are finished with a product and the producer, manufacturer or material recoverer picking up the product and taking it on a more circular route, there need to be some really good connections. But there is widespread confusion and failure to use the system effectively. Changing the system to be more accountable, with better identification and transparency, would go a long way to improve the quality of material recovered. Bringing in a nationwide system that used coloured bags or containers to clearly delineate between what is recycling and what is not would significantly increase the quantities of recycling. Adding a level of policing by those that work the system every day would highlight households who recurrently contaminate.  In a quick straw poll of listeners to a recent waste webinar, over 86% thought that waste producers (manufacturers, designers) should be responsible for waste. That goes for households too.

Many thanks to SITA UK for my training, and to Danny and the K7 team for giving me a seat in their cab, coffee in the break and answers to all my annoying questions.