Never Turn Your Back on the Ocean 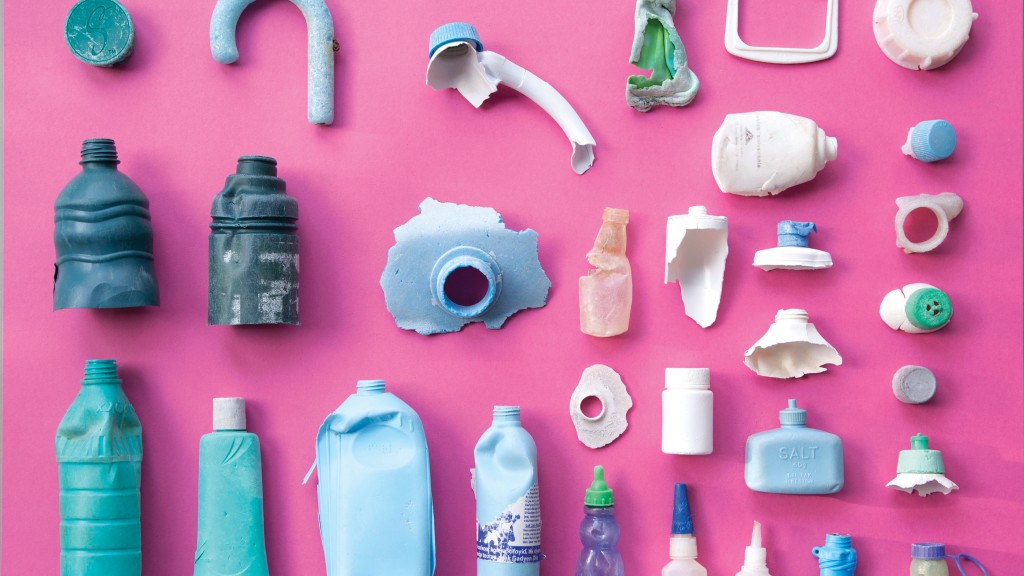 Sophie Thomas tells the story behind her new collection of work.

What’s the connection between the ocean and a toothbrush? Nothing. No, really there isn’t a connection.

Funny then that you find so many of them on beaches around the world, washed up after years of floating, photo-degrading (breaking down through the UV from the sun’s rays) but still usable as a toothbrush – if you were desperate.

I seemed to have ended up collecting these washed up items. Every time I went to the seaside if I saw one tangled in the seaweed I would pick it up. It was recognizable still but very out of place on a beach. 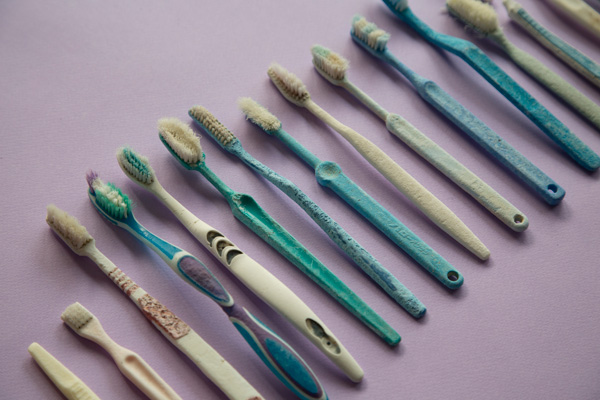 The first toothbrush I ever found was in a Victorian dump in Oxford. In the mud, amongst the bottles and broken crockery I pulled out a strange stick made of bone with faint blue lines and a grid of dots at the top. My family were appalled but I was fascinated, and though the bristles had long gone, I knew it was a toothbrush. The shape was basically the same as mine. It hadn’t changed for 100 years.

What had changed was the stuff it was made of. Toothbrushes are no longer bone but generally co-molded from a number of different plastics (including nylon, high density polyethylene and a rubber substitute called kraton, which has amazing resistance to heat and chemicals, just what you need in a toothbrush). It is a really good example of a disposable product we all use – around 350 in my lifetime – that goes directly into our waste streams (all those different plastics are impossible to separate and can’t be recycled together). The US landfill over 25,000 tonnes of them every year.

Plastics are now one of the most common pollutants of ocean waters worldwide. Pushed by winds, tides and currents, plastic particles form with other debris into large swirling accumulation zones, known to oceanographers as gyres.

In the broad expanse of the northern Pacific Ocean, there exists the North Pacific Subtropical Gyre, a slowly moving, clockwise spiral of currents created by a high-pressure system of air currents. Due to its lack of large fish and gentle breezes, fishermen and sailors rarely travel through the gyre but it could be called the largest landfill in the world as it collects some of the 8 million metric tonnes of plastic that enters the sea each year. 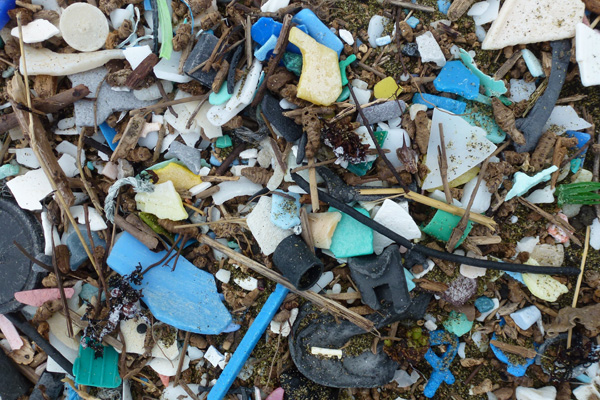 The area known as The Great Pacific Garbage Patch is one of five major garbage patches drifting in the oceans north and south of the Equator. One of the closest pieces of land near the patch is Big Island, Hawaii and Kamilo Point is the closet beach. Kamilo beach (or Trash beach, as it is called by locals who know it) is somewhere near the southern most point of the USA. It is an hour further along from Green Sands beach on the volcanic coastline in a deserted area of land where no-one lives.

If you ask many Hawaiian locals if they know Kamilo Beach you mostly get a blank look. It’s not a tourist destination or a local hotspot. It’s also really hard to get to, as it’s not on what you would call a road. You need a 4WD and a very good sense of direction.

My general enthusiasm to go and physically see this tragic scene with my own eyes started when I was in touch with the Algalita Foundation who were looking for people to join them on a two month boat expedition to the Pacific Garbage Patch. Having young children and being prone to bad sea sickness put a stop to this dream. After interviewing David De Rothschild about the Plastiki voyage and running a number of The Great Recoveryworkshops at recycling and recovery facilities, including one with Cape Farewell, my next stop had to be Kamilo beach.

The islands of Hawaii are extraordinary, diverse and incredibly beautiful. But their beautiful beaches see the results of this global plastic waste tragedy wash up onto their shores every day on every tide. The amount of plastic-to-sand ratio at Kamilo beach is shocking, even to me. In a half hour walk along the coastline I picked up 18 toothbrushes alone.

I brought back what I could carry, feeling bad that I could not clean up more. Everything I picked up had a story, a journey from Japan after the Tsunami, a long haul drift beginning by being blown from the landfills of the USA. There were snatches of words on bottles bleached by the sun – flotsam poetry. There were tops of bottles, locally known as shark plastic, where sea birds and fish had gnawed away at the edges giving a ragged effect. Some plastic had been in the sea under the hot UV sun so long it turned to powder when I touched it. Some pieces had been in conquered by nature, becoming a home for new life, new coral, new animals. Everywhere you looked plastic was present, deep in the fabric of the beach and seemingly almost impossible to extract.

90% of the world’s rubbish that floats in oceans is plastic and currently only 5 % of the world’s plastic is recycled.  We cannot just cut out plastic from our lives. It is the ‘workhorse material of the modern economy’. But we need to find ways to deal with it. 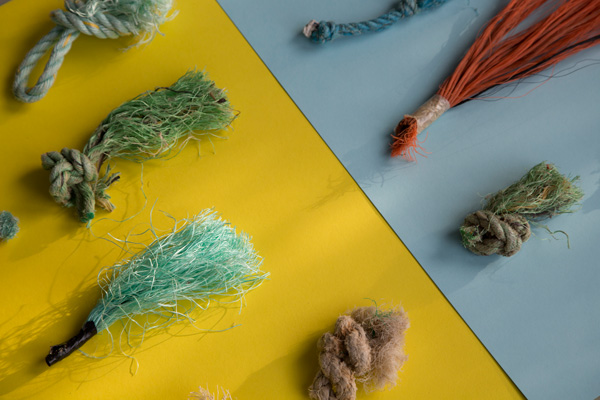 Cleaning up the oceans is one option, it is however not efficient. The oceans are too big, the estimated 5.25 trillion micro plastic pieces too small and mostly sitting on the bottom of the ocean, and no one country is directly responsible.  So the currents continuously move the pollution around and the gyres continue to act as “shredders” to the plastic before dispersing it across the globe. The solution to this truly global challenge must be therefore to tackle the problem at its source.

Growth in the global use of consumer goods made from plastic is projected to increase significantly over the next ten years (it currently sits at approx 6bn metric tonnes a year). Unless steps are taken to manage this growth’s connected waste streams, by 2025 the ocean could contain one tonne of plastic for every three tonnes of finfish.

Marine litter is also one of the clearest symbols of a resource inefficient economy. These objects that litter our beaches and impact our environment should be captured for their value before the reach the seas.

Adopting a circular economy approach, which puts emphasis on; designing systems that prevent waste and encourage recovery of valuable materials, designing products that optimise materials for their effectiveness in use stage, and simplifying the use of plastics, especially in packaging so that recycling can be streamlined and efficient would be the most effective solution for marine litter.