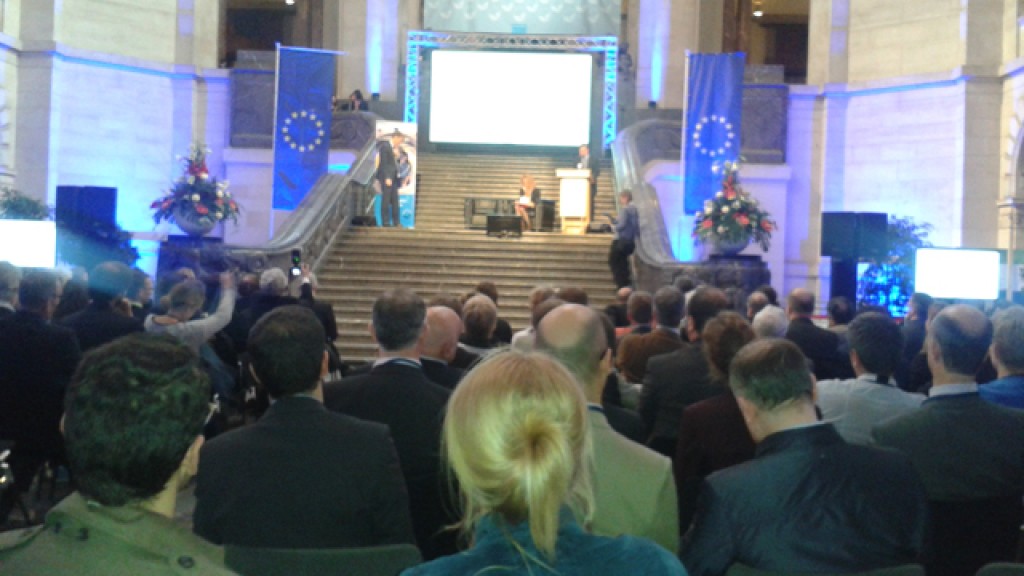 Earlier this month, The Great Recovery attended the 16th European Forum on Eco-Innovation in Hannover. This year’s topic was ‘Wasted Potential! Towards circular economy in cities’, and as such The Great Recovery was invited to present its work as one of 13 case studies from across the EU.

Over the two days, we heard from a spectrum of businesses, regional authorities and citizen groups who are tackling problems of waste in urban areas. Some of the most unexpected were also the most inspiring!

Goths rock out on waste

In Gothenburg, Sweden, Pal Martensson coordinates a waste ‘amusement park’ (his words) of 30,000 square metres which includes a restaurant, shops and community information centre. People bringing their rubbish to the tip are met by site workers who inform them that, in most case it’s not actually rubbish but valuable material, which can be sold in the shop or donated to local charities. Last year, the park held a ‘waste concert’ and an art exhibition, in which it auctioned off ‘rubbish’ paintings and raised money for local causes.

With a yearly turnover of £1.2m, not only is the park providing local jobs and contributing to the economy, it’s also changing the community’s attitude to its waste. By making waste disposal simple and fun, the city is generating new streams of social and economic value whilst also averting environmental damage.

One of the greatest joys, according to Martensson, is the delight shown on the faces of locals who discover that their old carpet, TV or fridge has a value and can be donated or sold for a good cause rather than joining the obsolescent hordes heading for landfill. This ‘feel good’ factor must not be underestimated, and Gothenburg demonstrates the importance of ingenuity and creative thinking in designing systems to deal with and divert waste streams.

Another city pioneering new approaches to waste and resources is Amsterdam, with its 2014-18 ‘De Circulaire Metropool’ programme, and public-private partnerships spanning the harbour, water, energy and waste sectors that have started to lead the way on industrial symbiosis.

The seminal example of industrial symbiosis was given by a representative from Kalundborg, the 40-year-old Danish cluster of industries that evolved processes to share and benefit from each other’s waste streams. Not only do the companies share their wastes, but they also collaborate on funding for mutual innovation and test centres, and it is this system built on trust and communication between a diverse network of players – backed up of course by commercial agreements – that makes Kalundborg so special.

On the second day, we heard from the German VDI Centre of Resource Efficiency, which brings together the might of Germany’s main engineering association to provide resource efficiency tools and systems level processes for SMEs. We listened as Christian Hageluken, a director of Belgian firm Umicore which owns the largest smelter in the world, described the company’s journey from being merely a mining and smelting outfit to recovering 500,000 tonnes of precious metals from waste every year. He highlighted the need not only for innovation in technology, but also for new business models and stakeholder cooperation in ensuring a ‘systems approach’ to the logistics of materials processing.

Presentations from the Repair Café in the Netherlands and the Repair and Service Centre (R.U.S.Z.) in Vienna shone a light on the growing movement of citizen repairers who are raising awareness of planned obsolescence and enabling communities to realise new value from their broken appliances. Finally, Veronica Kuchinow, founder of ZICLA, told her remarkable story of revolutionising cycling in Barcelona through the design of the Zebra traffic separator from recycled waste.

The Forum was rounded off by a visit to the vast Hannover Messe, where we saw examples of urban agriculture that combined office space with aquaponics. We were suitably impressed by the latest innovations in German industrial sewage systems, where gas from the sludge is used in a combined heat and power (CHP) plant to generate electricity and heat for nearby swimming pools and public buildings, as well as being processed into biogas and hydrogen to fuel vehicles.

When it comes to eliminating waste and pursuing a circular economy, the emphasis of the conference itself highlighted once again the need for new business and partnership models, and above all pointed to the critical stage of design as a catalyst for innovation.