This blog was first posted on the 1st November by Sandy Rodger on his Lighthouse Leadership blog.

Yesterday I dismembered an electric toothbrush. Literally smashed it to pieces and tried to separate it into its component parts. In fact it took four of us to do it, wielding outsize cutters and other weapons not found in the average DIY toolbox. It wasn’t my toothbrush but I have one very similar.

It was a shocking experience. Why?

Well firstly, obviously, this is an item built never to be dismantled. It combines plastics and metals in a form which can only follow a linear path from earth to earth – from mines and oil wells, through a brief visit to someone’s home, back to a landfill site. Apparently for it to be economic to dismantle an item of this value manually, it needs to be doable in 7 seconds. It took the four of us nearly an hour! If we end up with 9Bn people, and everyone has one of these which lasts for say 2 years, that’s 4.5Bn toothbrushes every year added to the landfill pile, with all the old ones still sitting there for years to come.

Secondly, the spurious functionality. I could imagine the box this came in, with those little bullet points on the outside we love to compare – how many speeds, special “action” of some kind, timers, LCD displays, etc etc. Even if an electric toothbrush with a rotating head does clean teeth better than a manual brush (I’ll come back to that question), the rest is just a way of “out-claiming” the essentially identical toothbrush in the next box along the Boots shelf. Is this consumer choice, in any useful form? And the price of that is a ludicrously complex design, with a large circuit board packed with rare earths. Even the outer casing had plastic, rubber, and metallic elements to make the device look like a miniature spaceship, which somebody must, bizarrely, have described as a design – we all “need” a spaceship in our bathrooms, clearly!

Thirdly, the price of being obsessed with human safety. The design was of course driven by regulations around electrical safety in a bathroom. So it has an induction charger, transformer, and some of the electrical components are embedded in a kind of plastic goo which had been squirted into the casing after assembly, like the gel around the meat in a pork pie. Great for insulation, terrible for recycling, and a lazy piece of design because a better designed casing would do the same job. So – no electrocutions but a big pile of waste.

Finally, the sheer force required to break this thing to pieces. One of the cutters we used ended up with a dented blade as we took on the NASA-grade axle that rotates that little plastic head in your mouth. So a supremely simple manual task (brushing one’s teeth) is subject to all the brute force we can apply – in mining and drilling, refining and smelting, moulding and machining, assembling and packaging, up to this end of crushing and tearing. An elegant engineering solution to clean teeth this is not. If a rotating head cleans teeth better, couldn’t we just learn to twist our arm a little as we brush?

Why was I doing this? I was at the Closed Loop recycling centre in Essex, at a workshop held as part of the RSA / TSB sponsored project “The Great Recovery.” This is trying to foster collaboration to drive “circular supply chains,” where re-use and recycling are taken to an entirely new level, so that minimal resources need to be extracted, and minimal waste returns to the earth as landfill. 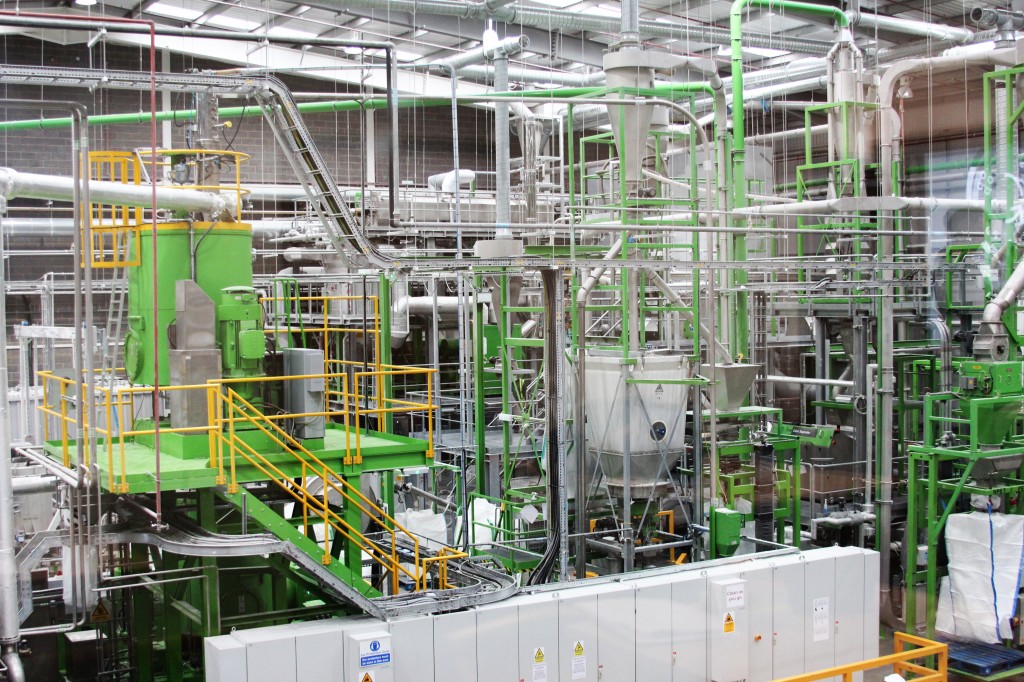 Impressive as the Closed Loop facility is, it strikes me as more of that almost obscene force – huge machines trying to convert our waste (packaging in this case) back into something we can use. This is literally entropy in action – you can see, feel, and hear the energy required to create the order of pure materials out of the disorder of the waste.

So in pursuing this work we need to be mindful of the waste hierarchy – if we can reduce and re-use that is so much better than even the most sophisticated recycling. The challenge is to make that work as a business model. The toothbrush company would not remotely match its current profits making conventional toothbrushes. And it’s tough from a consumer point of view too. That little arm twist, that would match the brushing performance of the rotating brush, is, like all habits, not easily made habitual. At the very least it is expensive even to try to teach consumers such habit changes – and why would the toothbrush manufacturer do that when they only have the profit from simple manual toothbrushes to look forward to?

So the real innovation needed is in the deepest rethinking of brands. Utilities face the startling challenge of having to make more money by selling less electricity and water. Likewise branded goods manufacturers have to develop new relationships with consumers in which they can make profits out of people’s genuine wellbeing, but not by brute force solutions involving lots of physical stuff. Can I prove that down this route lies continuing profit growth – no I can’t, no-one can – but ultimately the toothbrush mountain will keep getting bigger and sooner or later that will bounce back as increased cost or regulation. When that happens the winners will be those already prepared – well established in markets of more genuine value to consumers and society.

An interesting factoid from the day was that Lego have no intention of making their toy bricks recyclable – because they have remained usable and completely interchangeable since 1958. They never need to be thrown away – if you’re too old to play with them simply pass them on. Supposing some products, and a lot of components within products, could be regarded as “good enough” so that they remain standard, are shared and reused, and not constantly redesigned? Maybe every child aged 5 should get a prized present – a free electric toothbrush, so well made that it lasts a whole human life, and the toothbrush company makes it’s money out of 100% recyclable brushes. But these considerations aren’t easy – the Apple gadget I’m writing on is apparently appallingly hard to recycle, but by having continual free software upgrades I’ve kept it far longer than my last computer. I don’t know if that makes it “a good thing” or if there is a better alternative.

All this brings challenges for business models and supply chains. Businesses will make more money from services and less from products, and even the products may be rented to consumers rather than sold. Supply chains will be far more focused on multiple cycles of interaction with the consumer, rather than a single one-time flow from a source to a destination – so they will need to be more decentralised, reversing the trend of the last 30 years.

And (as you would expect on this blog!) this is hugely about leadership. There are serious discontinuities in business practice here, taking one set of risks to prevent the impact of another set. What I did like about Closed Loop was the kind of considered pragmatism of their work – making a significant investment in a recycling facility which is the right thing now, even if in the long run it may be rendered redundant by increased re-use, or by better consumer segregation of their own waste. There are few opportunities to invest in a guaranteed future, and it is a huge mistake to think that, even by brilliant total systems thinking, such certainty will suddenly emerge in the sustainability field. On the contrary this is about pragmatism and flexibility, coupled with the courage to move forward in considered stages when the time is right. I haven’t met Closed Loop’s corporate leaders, but it seems they have their heads screwed on.

So what about my own toothbrush? Well now that I have it, I may as well use it until it packs in. Then I think I’ll pick a therapeutic moment to relieve my anger by dismantling it myself and putting as many bits as possible in the right recycling streams. And then I’ll buy a normal toothbrush and try to teach myself that cunning little arm twist that will keep me smiling!